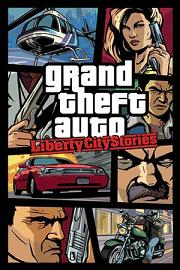 The first of the two "Stories" games in the Grand Theft Auto series, which were both made for the PlayStation Portable and later ported to PlayStation 2. The story takes place in 1998, a few years before the events of III, and follows a younger, slimmer Toni Cipriani's rise to power in the Leone crime family. And it's not easy. Things get messy, with uncooperative mayors and families from the Old Country wanting in on the action.

Tropes of this game: