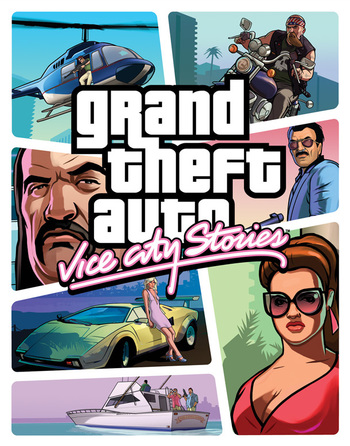 Like Grand Theft Auto: Liberty City Stories, this game took a new plot to the same setting as a previous Grand Theft Auto game. But it avoids being a Mission-Pack Sequel to Grand Theft Auto: Vice City by including a lot of its own elements, such as improved gameplay, mission elements and the ability to swim. Some of the side missions now have continue points, for one. Like LCS, it was originally a PSP exclusive, but was later ported to PS2. A fan-made PC version is being developed by doing a total conversion of Grand Theft Auto: San Andreas.

The plot is stocked with a lot of Dramatic Irony, as the game is both chronologically the earliest in the GTA 3D era as well as the last entry in that continuity, meaning that it is loaded to the brim with Call Forwards and Continuity Nods to the other games in the 3D era.

This game is set in 1984, two years before Vice City, and follows Victor "Vic" Vance, a former soldier who is dishonorably discharged after his corrupt commanding officer, Sgt. Jerry Martinez, pays him to shelter drugs and a prostitute on base — both of which are discovered. The rest of the game is about him getting revenge on Martinez, who is part of a powerful drug cartel, as well as (reluctantly) building a criminal empire with his brother Lance.