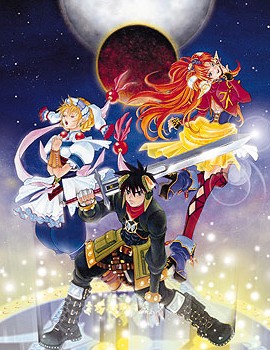 "If I listened to every piece of good advice I heard, I'd have killed all of you already and run off with your gold."
— Our hero, ladies and gentlemen.
Advertisement:

The second entry in the Grandia series, Grandia II was the only game developed by Game Arts for the Sega Dreamcast. Originally released in 2000, it received PlayStation 2 and Windows ports two years later. The game received its English localization from Ubisoft.

The plot kicks off when Ryudo, a rude-but-experienced mercenary, is hired by the Church of Granas to act as a bodyguard to one of their most valuable nuns: Elena, a young and idealistic songstress. She is taking part in a ritual to renew the seal on one of the pieces of an evil fallen god.

Unfortunately, something goes awry with the ritual and Elena is possessed by the evil fragment, which manifests itself as a saucy split personality calling herself Millenia. With the destruction of the seal, the other "Pieces of Valmar" around the world have gotten loose, and both Ryudo and Elena are tasked with tracking them down.

Naturally, it's not quite as simple as that, and the game mostly deals with a deconstruction of Black-and-White Morality.

Grandia II's most notable aspects are the battle system: A refinement of the battle system from the original and the benchmark for successful merging of real-time and turn-based battle. And the music. Particularly the battle themes. Yes, the battle system was so popular that the next game was almost entirely built around it (with less-than-stellar results).

A PC remaster of the Dreamcast version, Grandia II: Anniversary Edition, was released on August 24, 2015. The re-release includes remastered visuals, a new harder difficulty, and dual audio option. On August 16, 2019, the remaster was updated further with support for widescreen and also released for the Nintendo Switch.