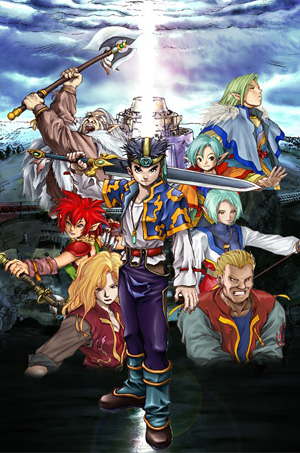 A natural disaster known as the Elemental Disorder has thrown the world into chaos, forcing the Nortis Army to mobilize and search for a solution. A young Ranger named Evann is recruited to help in this endeavor, an offer that he is prepared to turn down until he discovers that his childhood friend and rival Kroitz is a high-ranking commander within the army. Accepting the mission, Evann must travel to the four elemental temples that lie across the world and investigate just what (or who) could be causing the Elemental Disorder.

A 2002 Spin-Off of the Grandia series focused on Dungeon Crawling and combat, Grandia Xtreme's gamepley largely involves grinding for levels, equipment and skills. There are ten dungeons in the game: seven Elemental Ruins, and three Randomly Generated Levels (one of which is a 100-floors Bonus Dungeon).