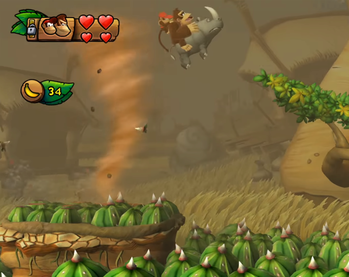 An area in a video game where the player's challenge is made more difficult by winds or air currents (visible or otherwise) that blow the character about, interfering with and sometimes aiding their platforming skills. The winds may be localized to specific sections of the level, or may be stop and blow at intervals. The player may have to have to time their actions to take advantage of favorable winds and/or push forward to compensate for hostile winds.

The source of these mighty winds could be anything — an object in the level, a specific enemy, or just natural phenomenon of the area in question. Characters of a metallic or robotic nature may have to deal with magnets for similar trouble.

Get ready for extra challenge if the level has Ledge Bats.

These types of levels often overlap with Level in the Clouds, Levels Take Flight, Funnel Cloud Journey, or Death Mountain.

Not to be confused with a powerful wind that halts the character's progress through a specific area entirely (that's just another kind of Broken Bridge).