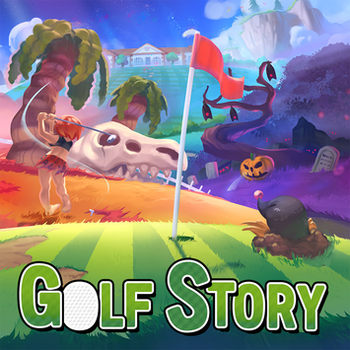 "The course was lovely today, got some birdies when I needed them and par is a good score here."
Advertisement:

Golf Story is an Action RPG for the Nintendo Switch centering around golf, in the vein of Mario Golf's Game Boy Color incarnation.

Following a brief flashback of the unnamed player character as a small child wanting to make his father proud of his golfing skills, the story cuts to 20 years later, where the protagonist is procrastinating on life. Finally deciding enough is enough, he sets out to achieve his dreams. Along the way, he'll run into a Frisbee golf gang, crocodiles, angry geese, and many other obstacles.

A sequel, Sports Story, is in the works for the Nintendo Switch, originally planned for mid-2020 it was indefinitely delayed before ultimately being given a December, 2022 release.