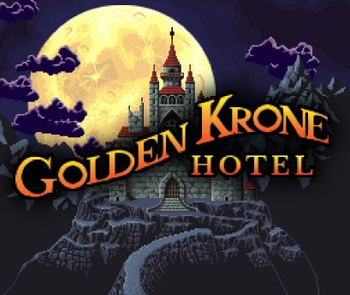 Golden Krone Hotel is a vampire-themed Roguelike game, developed by Vulgat and released on Steam in 2017. Its protagonist is a girl named Sorina Arobase, who explores the titular location in search of the exiled vampire prince Fane. Along the way, she can explore various side branches to gain extra items and experience points.
Advertisement:

A notable game mechanic is that while Sorina (usually) starts as a human, she suffers from vampirism and will turn over time. Once this happens, all enemy vampires become friendly, but the many other human explorers won't take kindly to your change...

Vampirism also comes with a host of other advantages, such as increased strength and the ability to hide in shadows, but also with disadvantages such as illiteracy, the inability to use weapons or magic, and weakness to water and sunlight. Changing back also requires valuable Soul Elixirs, so switching between the two forms isn't something to do casually.

The game also simplifies many aspects of Roguelikes. For example, all potions are unidentified at first, but you are shown three possible effects that they might have. Also, there is no equipment management: all equipment is either objectively better or worse than your current one, and if it's worse you automatically sell it, instantly gaining money.