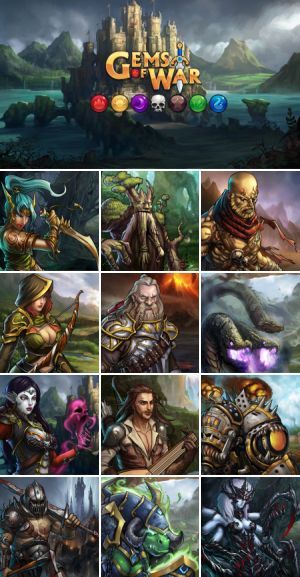 Gems of War is a Puzzle Game (specifically, a Match-Three Game) with RPG Elements. It is developed by Infinite Interactive (with various associates), and is similar to the same studio's earlier Puzzle Quest games. It's an online game with both single-player and multi-player components together, although players can largely ignore the multi-player and stick to single-player if they prefer.

The game revolves around battles in which each side has up to four troops present. Each troop has stats for health, armour, attack, and so forth. Matching three "skull" gems causes a direct attack by your first troop against the first enemy troop, while matching coloured gems charges special moves (attacks, buffs, heals, etc) for each troop, depending on their particular colour affinity. When a unit has no health left, it's removed; when all are removed, that side loses. Winning a battle produces rewards like experience and gold.

The context for these battles is an array of kingdoms which players can move between, each with its own theme. Each kingdom has a plotline consisting of a series of fixed battles against AI opponents (progression through which also unlocks the ability to re-fight those battles at tougher levels and for more rewards). Kingdoms have to be unlocked with in-game currency, which comes on a regular basis but is more plentiful if you upgrade various things. Troops can be acquired and levelled-up with other kinds of in-game currency (both of which can be won in battles). On the multi-player front, you can raid other people, defend against raids, and join guilds which are rewarded for accomplishing certain tasks.

The game was originally released on Steam, iOS, and Android in November 2014. Afterwards, it was ported to PS4 and Xbox One in November 2015, and to Nintendo Switch in March 2019. It is Free-to-Play on all platforms.

Tropes relating to specific characters, their quest-lines (which aren't connected), and to troops (i.e. recruitable or fightable units), can go on the Characters page.

Gems of War provides examples of: