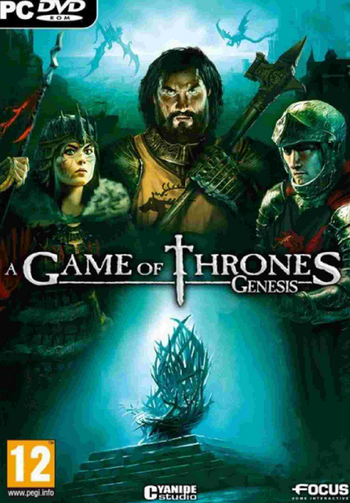 A Game of Thrones: Genesis is a Real-Time Strategy Game/Western RPG for the PC based on the backstory of the Fantasy Doorstopper series A Song of Ice and Fire, also popularized by the HBO series adaptation Game of Thrones. It was developed by Cyanide Studio and published by Focus Interactive.

The game covers 1,000 years of Westerosi history leading up the to the first novel in the series, begining with the arrival of the warrior-queen Nymeria.

The object of the game is to win the Iron Throne, and that eight of the major houses will be playable and each has at least one special unit and ability. The game is won by building Prestige for your chosen house, which can be accomplished peacefully, by laying waste to your rivals, or anything in between.

The game has a Versus mode with up to eight players and a Campaign mode for single players.