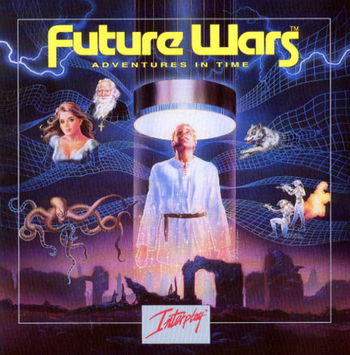 Future Wars is an 1989 Adventure Game by Delphine Software, released for DOS PCs, Amiga and Atari ST. It was one of the first adventure games on the PC to use 256-color VGA graphics, released over a year before King's Quest V: Absence Makes the Heart Go Yonder!.
Advertisement:

in 1989, a nameless window washer stumbles upon a time machine while snooping around his boss' office (in an attempt to play a prank on him) and happens to foil an alien plot in the middle ages; it is revealed to the protagonist that a war between the Humans of the future and a hostile alien race known as the Crughons is being staged throughout time, and the protagonist is sent into points in Earth's history to sabotage the Crughon's plans to destroy humanity.