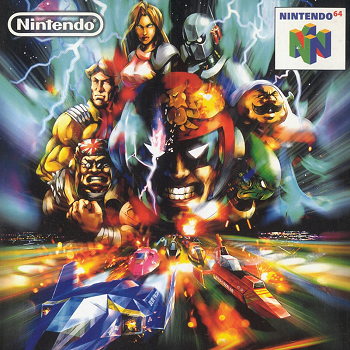 Welcome to the world of 2,000 Kmph.
"You got boost power!"
Advertisement:

F-Zero is a long-running Nintendo franchise where futuristic vehicles race across ridiculously dangerous tracks, barreling down the courses faster than the speed of sound. The series' iconic feature is the single energy bar used for both your ship's shields and boost power. The more damage you take the less you can boost, but the more you boost the more likely you are to find yourself looking at an early retirement.

An anime series, F-Zero: GP Legend, aired in 2003, but the English dub (produced by 4Kids Entertainment) was cancelled after 15 of the 51 episodes were aired; tropes for that go here.

YOU GOT BOOST POWER! F-Zero contains examples of the following:

Pour it on!! You're way out in front!
Feedback

The Charm of Mrs. Arrow

The Charm of Mrs. Arrow