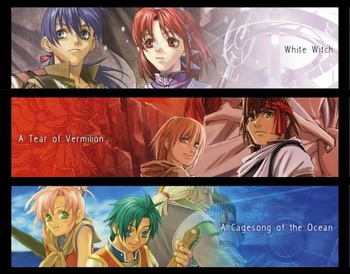 "Long forgotten...are the days before the land was cloven by Gagharv...
When the three worlds existed as one...
The crack in the earth is the scar of our sins...
How long have we been living in guilt?"

A trilogy of turn-based RPGs created by Falcom that is part of the larger The Legend of Heroes series (itself a Spin-Off of the Dragon Slayer series). The Gagharv Trilogy is a sub-series composed by the third, fourth and fifth Legend of Heroes games, which shares the same continuity.

The trilogy discarded the Dragon Slayer brand its predecessors have. The games were later remade for the Playstation Portable and given a North American Release by Bandai.

The games are rather infamous for its Bad Export for You, which very nearly killed the chances of localization for The Legend of Heroes: Trails in the Sky, and by extension, the Trails Series as a whole. Even then, they influenced a lot of plot points in the Trail series.

open/close all folders
General Tropes
Prophecy of the Moonlight Witch
A Tear of Vermillion
Advertisement:
Song of the Ocean