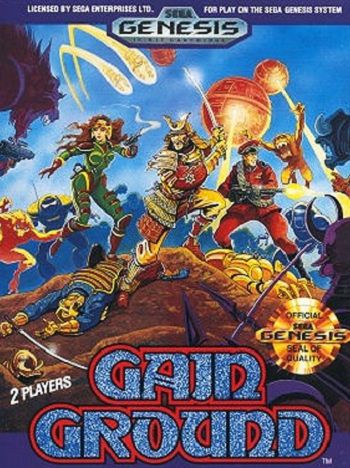 Gain Ground is a 1988 action-strategy game by Sega. It was originally produced for the Arcades, later ported to Sega Master System, Sega Genesis, and so on. Among them Sega Genesis version is the nearest to original game, while adding one new Epoch.
Advertisement:

The game set in the year 2348, where a long period of peace has deprived the earthlings of their instinct to wage war. The Federated Government, greatly concerned regarding this ever increasing dangerous situation, developed a Gain Ground simulation system in the year 2348 in an effort to instigate their ever waning fighting spirit. However, suddenly without warning, the Supercomputer went berserk and took many of the citizens as hostages. In order to rescue the people, three of the bravest warriors were urgently dispatched to go forth into the deadly Gain Ground.

The goal of each stage is to either get all characters you control out of the stage via the marked exit, or to kill all enemies on the map. The latter ends the level without having to get any more characters out, but it can be quite difficult depending on where the enemies are hiding. If the timer for the level runs out before all enemies are defeated, all characters in the player's party that did not make it into the exit are lost, and if all of a player's characters are killed before they can reach the exit of a level, the game is over.note Unless a continue is used, which will reset the player's score to 0 and give him/her the default starting roster of three.

The game also has "Hostages" that can be rescued by picking them up and carrying them to the exit. Each hostage unlocks a new characternote starting in the next stage, of course, since characters that have reached the exit cannot be used until the next stage., which will have a unique set of weapons. However, if all of the enemies are defeated before a hostage is brought to the exit, the character will not be obtained. Also, any character that you lose turns into a hostage, who can be saved in a similar manner. However, if you lose another character when trying to save them, then the first disappears for good. This unique mechanic means that your lives are directly tied to the tactics you have to choose from- if you lose a character and cannot rescue them, you're down a life AND you've lost the weapon they had.

Several stages in Project X Zone are modeled after this game, and use a remix of its main theme.