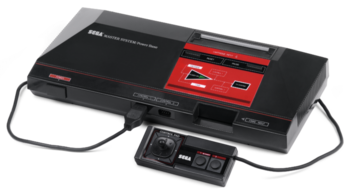 The original model that launched in North America and Europe.
"Now, there are no limits."
Advertisement:

The Sega Master System, though not Sega's first 8-bit game console, marked the point where they began making waves in the international gaming market. It was released in 1986 in response to the arrival of the Nintendo Entertainment System in North America.

Realizing that the SG-1000 was too antiquated to compete with Nintendo's Family Computer on a global scale (the SG-1000 was essentially identical to the ColecoVision and the original MSX, as they were all built from common shelf parts), Sega significantly upgraded the console's technical capabilities for its third iteration. Released in October 1985, this new version of the console was dubbed the Sega Mark III and featured a slightly faster CPU and an upgraded video display processor over previous models (bringing it on par with both the Famicom and the MSX2), while having backwards compatibility with all legacy SG/SC series software and peripherals. Cosmetically, the Sega Mark III hardware was very similar to the SG-1000 II, aside from the addition of a built-in card slot, meaning that it could play games in so-called MyCard format (which required a separately sold Card Catcher adapter on SG-1000 consoles) in addition to traditional cartridges, as well as different placement for the controller ports (which were moved from the rear to the front) and the power switch (which was placed from the front to the back).

In the same way the Famicom became the NES outside Japan, the Sega Mark III was heavily redesigned for its export version (codenamed the "Mark IV"), receiving a black casing that would become a trademark for all subsequent Sega platforms (at least in the west) up until the Dreamcast. The console was originally marketed as the "Sega Video Game System" in North America (and simply referred to as the "Sega System" in technical documentations and certain commercials) and was initially sold in three bundles: the "Sega Base System", the "Sega Master System", and the "SegaScope 3-D System". Despite this, all the consoles produced had "Master System/Power Base" printed on them, regardless of the bundle purchased, and even the system's BIOS referred to the platform as the Master System, which is how it became the standardized name. The Mark III would be relaunched in Japan in 1987 with the Master System name and styling, and also with a built-in FM sound chip (never included in the export versions and sold separately as an add-on for the Mark III) to enhance the quality of chiptunes, along with a rapid fire switch instead of a reset button.

All things considered, the Master System was more advanced than the NES on a surface level, although the NES was able to keep up thanks to the inclusion of memory mappers in later game cartridges that expanded the hardware's capabilities. Ultimately, Sega failed to wrestle away notable market share away from Nintendo in the Japanese and American markets. Sega's reluctance to embrace third-party developers and publishers during the SG-1000's life allowed Nintendo to sign most of them to strict exclusivity deals in Japan and America. Sega was thus forced to depend on their first-party titles, which didn't have the same staying power of Nintendo's own franchises. The unfortunate timing of the PC Engine's launch in Japan, with its graphical capabilities that blew away both the Famicom and the Mark III, didn't help matters, which forced Sega to come up with a new system that could succeed the Master System and compete adequately with the emerging 16-bit generation: the Mega Drive, otherwise known as the Sega Genesis in North America.

The Mark III/Master System was discontinued in early 1989 in Japan, a few months after the launch of its successor in the end of 1988. In 1987, Sega licensed the American distribution rights of the Master System to Tonka in an attempt to boost its market share, but Tonka's complete lack of experience with video games resulted in worse sales than before. After Tonka's rights expired in 1989, it lasted only a couple more years in the United States as a budget-priced alternative to the Genesis in the form of the redesigned Master System II (aka "Mark IV Jr."), before being discontinued in 1991. Only about 2 million units ended up being sold in the North American market.

However, the Master System did gain a lot of ground in Europe, Oceania and South America. Nintendo had bungled their entrance into the European market with some bad decisionsnote For the UK, Ireland, Italy, Spain, Portugal, Australia and New Zealand, Mattel of all companies was in charge of marketing and distribution. Perhaps remembering their own console attempt not having done so well, they were determined to see Nintendo sunk like they were and didn't properly market or stock the NES. In the UK in particular, the NES was so rare as to be practically mythical., leaving an opening for Sega to swoop in and steal control with a cheaper product. The U.K.'s launch NES bundle with R.O.B. sold for about £140 with games upwards of £50, while the standard Master System bundle was £79.95 and its games were £29.99 at most. Sega's marketing ensured their system could compete with Europe's more entrenched home computer market by positioning the Master System as a machine for high quality arcade ports without any of the load times found in computer games. Sega's plan worked, and the success of the system in the region even led to a significant number of games that didn't reach North America get imported to Europe instead.

The Master System was especially successful in Brazil. Sega partnered with the recently-formed Tectoy in 1989 to distribute and manufacture consoles locally, letting them bypass Brazil's exorbitant import taxes that plagued (and continue to plague) other game consoles. Tectoy went all in on Sega, setting up an official fanclub and a phone hotline similar to the one Nintendo established in the U.S. to give hints on how to beat games. The Master System ended up being a huge success due to a lack of competition (Nintendo didn't try to break into the Brazilian market until 1993), establishing Sega's dominance in the country for over a decade. The Master System continued to receive new games in Brazil up until 1998 (including a version of Street Fighter II), with sales of the console itself only ending in 2003.

Although Sega's first party titles didn't gain ground until the Mega Drive/Genesis, their popular Phantasy Star series got its start on the Master System. Their sole handheld, the Game Gear, uses hardware quite comparable with the Master System, which facilitated the development of ports and multiplatform releases on both platforms. In fact, converters exist that allow Master System games to be played on the Game Gear and vice-versa.

"The challenge will always be there!"