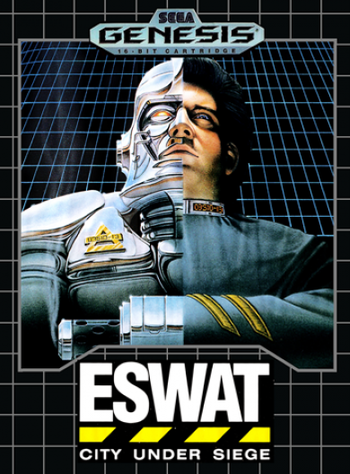 ESWAT refers to two drastically different games developed and released by Sega. Both are RoboCop-inspired action platformers where the player controls Duke Oda, a lowly cop who eventually gets to use a powerful suit of armour, fighting the crooks and sinister organizations that have taken over Liberty city.

ESWAT: Cyber Police is the original version, released in 1989 for the arcades. It is tactical action platformer in the vein of Rolling Thunder and Shinobi, featuring a similar focus on careful positioning and managing your limited ammo. It was later ported to the Sega Master System and several western computer platforms.

The second game, ESWAT: City Under Siege was released in 1990 for the Sega Genesis. Though also an action platformer, the game features vastly different level design, enemies and play mechanics. Whereas getting the ESWAT suit in the original didn't change much beyond giving you a machine gun and the ability to use ammo-limited special weapons, the suit here has a Jetpack and a full arsenal of switchable weapons, both of which need to be used in conjunction to clear the levels. Unlike the arcade version, it wasn't ported to any contemporary system, though it was included in a Compilation Rerelease.

Despite the title, it has nothing to do with the "E-SWAT" team from Appleseed.

Tropes that apply to both games

Tropes exclusive to City Under Siege