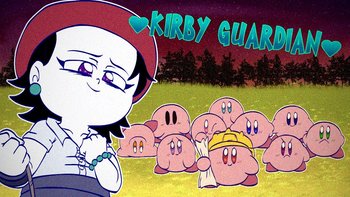 The cuteness that is Kirby has been multiplied by ten!
Advertisement:

Kirby Guardian is a series of animated shorts by KimiOmega based on the Kirby franchise. They focus on Adeleine and ten extremely tiny Kirbies, and each kirby has its own personality.

There are currently seven shorts available. The shorts can be found on either youtube

. There are also currently 12 comics, which can be read here