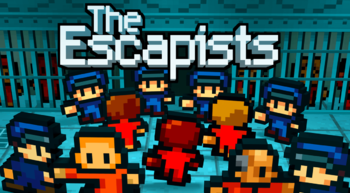 All that stands between you and your freedom is a perfectly executed escape plan. Of course, to escape, you'll need tools, and the guards aren't going to give you much. Your fellow cons might be more helpful... if you can stay on their good side. Be careful, though: Between the guards, the cameras, and the walls, escape isn't going to be easy.

The Escapists is a prison break game developed by Mouldy Toof Studios and published by Team17 Digital on February 2015.

A sequel called The Escapists 2 was released in 2017.

A island survival game set in the same universe called The Survivalists was released in 2020.

"Nice try Troper,"
"My boys found a Pothole lying around, and we traced it back to you."
"As punishment I'm placing you in solitary for a few days, hopefully it'll teach you a hard lesson!"