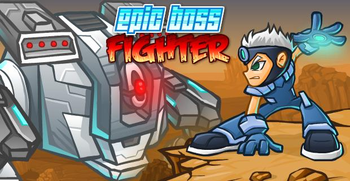 Epic Boss Fighter is a top-down Run-and-Gun Boss Game, made by EntertainmentForge in Adobe Flash and released

on March 5th, 2014. As its title suggests, the game consists of nothing but your character battling huge bosses on foot in order to protect the Earth.