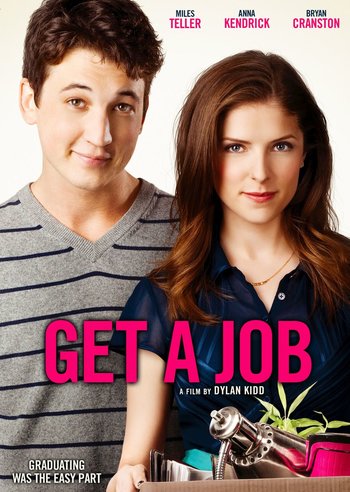 What would your first action be if you were fired from your job?
Advertisement:

Get a Job is a 2016 comedy movie directed by Dylan Kidd, starring Miles Teller, Anna Kendrick and Bryan Cranston.

Will (Teller) has just graduated from college and spent 2 summer unpaid internships for LA Weekly who has guaranteed he can work a paying job there after graduation. His girlfriend Jillian (Kendrick) has become a sales analyst at Johnson & Johnson. As soon as Will arrives to start his job for his employer Brian Bender (John Cho), the first thing Brian tells him is "We don't have a job for you". Brian's explanation for why? The company's downsizing! Will runs to his dad Roger (Cranston) begging for more money. Roger at first refuses, but as Will starts angrily preaching to his dad for not being reasonable, Roger asserts that he lost his job as well. Roger is now in the same boat as Will and so Roger also has to go out and find a job as well.

His parents unable to support him anymore, his dad also failing to get a job on account of old age, and job postings on the Internet asking for much more than just a college degree such as a lengthy history of work experience and professional knowledge of medicine, law or mechanics, what's Will to do?