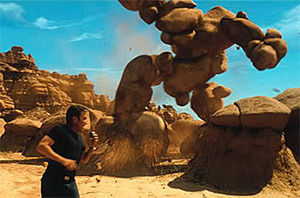 A monster made out of rock or chunks of metal. Nearly always very tough, it can take dynamite to get past them if they're guarding something. Gargoyles and golems are usually portrayed this way, and are typically massive creatures, ranging from slightly taller than humans to the size of mountains. Rock Monsters' composition can vary, from simply being a roughly humanoid arrangement of boulders or slabs held together by magic or some other force, to being a more "fleshy" creature with rock-like skin that can flex and emote the same way living beings can.

Super-Trope to Living Statue, as statues are made of stone, and Crystalline Creature, which covers cases of creatures made of gems, crystals, glass and similar substances. May overlap with Silicon-Based Life, Gem Tissue, Smash Mook, Mistaken for Granite, Dishing Out Dirt, and Elemental Embodiment. A person with Elemental Armor may be able to make themselves resemble this. Contrast Taken for Granite, when the creature didn't start out made of rock, and Sentient Sands and Living Lava for creatures made of different sorts of geological material.

They are occasionally used as a sword-and-sorcery version of Mecha-Mooks, both in terms of being mass-produced by the villain and being enemies it's okay for the heroes to graphically smash to pieces.

Ivan is the first to be akumatized by Hawk Moth, becoming the golem creature Stoneheart.

Ivan is the first to be akumatized by Hawk Moth, becoming the golem creature Stoneheart.