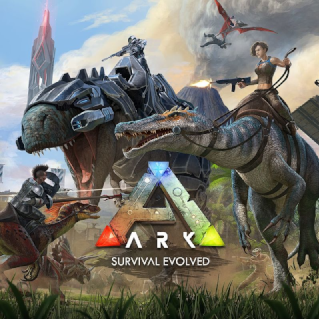 This could be you, riding a dino.
Advertisement:

You wake up naked, cold, and hungry on the shores of a strange island called ARK. There's some kind of diamond-shaped implant embedded into your left arm; you have no idea how it got there or why it's there at all. Surrounded by dinosaurs and other long-extinct creatures — some of which would like very much to have a delicious human for lunch — you must find a way to gather food and water, create items, develop new technology, and build shelters to survive while not ending up within one of their stomachs. However, if you're crafty enough, you may just be able to make weapons that can kill these beasts— or even manage to tame them so that they can protect you from danger and/or allow you to ride on their backs for quicker transportation. You're not the only one stuck here, though— there are several other people here in the same situation as you. You can either team up with them for easier survival... or just knock them out and take their stuff. And if you look hard enough, you could potentially find the secrets behind this mysterious island...

In other words, basically DayZ, but with dinosaurs. As a survivor, you must, well, survive. Eventually, you need to take that survival to the next level, and dominate. The vast majority animals that inhabit the different maps are fictional versions of actual, extinct animals with full scientific names and dossiers describing their traits and potential uses if tamed. Obviously, taming the animals is one of the main features behind the game, and it often involves knocking them out with arrows laced in tranquilizing narcotics and feeding them as they lie helpless on the ground. After which, they become your ever loyal companion.

The game was released for Steam Early Access on 2nd June 2015, and the full version was released on 29 August 2017 on PlayStation 4 and Xbox One as well as Steam. Several DLC expansion packs like The Center, Scorched Earth, Ragnarok, Aberration, Extinction, Valguero, Genesis: Part 1, and Crystal Isles have been released, an expansion called Genesis: Part 2 is in works, as well as a spinoff called ARK: Survival of the Fittest. Another spinoff called ARK Park was released by Snail Games and Peacock Studio. A Minecraft-inspired voxel-based spinoff called Pix ARK by Snail Games USA was released in Early Access. Both base Ark and PixARK have been announced for the Nintendo Switch.

The Sequel and Animated Adaptation, ARK 2 and Ark: The Animated Series were

Animals Inhabiting the ARK.
NOTE: These scientific names are not factual. While most of Ark's creatures are based on real-life animals, they have fictional species names and unique appearances to make them better suited to video games. Some are relatively similar to the real-life versions, some differ drastically, some are Mix-and-Match Critters, and some of these animals are purely fictional. Ark is a great way to introduce yourself to the scientific side of prehistoric animals, so if you see one you're interested in, hop on the internet and do some research!