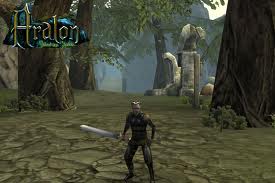 "What has been done cannot be undone, but it can be avenged."
Aralon: Sword and Shadow is a Western RPG for the iOS devices, created by Crescent Moon Games and released on December 16th, 2010. Described in the vein of "The Elder Scrolls meets Infinity Blade", it surrounds the story of the Lordel child in his quest to save the kingdom of Aralon.

After choosing a race (human, elf, troll) and class, the game begins with a dead father. This cliche is infamous in the fandom, and although the game averts the Doomed Hometown conundrum, the dead father has turned off some people.

Upon reaching the city of Callaheim, the Lordel Child learns that Merificus, an advisor to the king, has killed the Queen, Elenroh. In addition, he is also a demon and is corrupting the king's mind. Upon this the Lordel child, along with Gorak and Darius decides to unveil the illusion that hides Merificus' true form.

A sequel, named Aralon: Forge And Flame, was released on December 3rd, 2015.