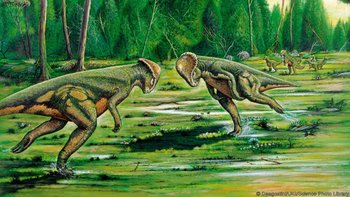 dinosaurs (sometimes colloquially referred to as a pachys), of which the famous Pachycephalosaurus

is a member, are typically shown headbutting each other much like you would see in rams, goats and oxen. They even been shown to headbutt other things with a devastating amount of force without sustaining any major injury. This was popularized by the story "A Gun for a Dinosaur", of the Rivers Of Time

series by L. Sprague de Camp. However, evidence suggests that, while their domed heads were weaponsnote  numerous fossilized domes from the Pachycephalosauria skulls have been found with dents and other injuries; many have healed, which has been taken as evidence of combat use, their ability and use with them has been greatly exaggerated.

Evidence for this can of course be found in the skulls of numerous members of the Pachycephalosauria family. A good example of this is how two Pachycephalosaurusnote  a half-ton dinosaur were to ram each other head on at top speed they would have knocked each other out. This of course would have been a evolutionary drawback leaving them incredibly vulnerable for an extended period of time. The same problem would also of course exist if they rammed various objects like large trees, boulders and metal. The dinosaur's neck and back, though strong, are believed to be unsuited for head-on head blows. Instead, many scientists believe that the dinosaurs either pressed their heads together and pushed each other, or that they butted each other in the side.

Another issue has to do with the shape of pachycephalosaurid skulls; as their domes were rounded and relatively smooth, they wouldn't have been suited for head-on impacts, as they would have simply slid past each other on contact. The horns of creatures that do headbutt each other in the modern day, such as rams, typically have flat front-facing surfaces to avoid this exact problem.

Pachycephalosaurs in fiction, naturally, don't have these problems. They will often be shown charging at top speed into everything in sight, be it other members of their own species, bigger dinosaurs, or time machines with people inside. They're also likely to be depicted as aggressive and violent, in a departure from the usual depiction of plant-eating dinosaurs in fiction.

Naturally this is a subtrope of Artistic License – Paleontology, due to it being about the unrealistic portrayal of a prehistoric animal, and of Use Your Head. It's also a subtrope of Animal Stereotypes, in a rare case where the stereotype belongs to a long-extinct species. Compare Raptor Attack, Gentle Giant Sauropod, and Social Ornithopod for stereotypical depictions of other dinosaur species, and Temper-Ceratops and Tough Armored Dinosaur in particular for another cases of herbivorous dinosaurs being portrayed as aggressive and dangerous. It also doubles as a form of Beastly Bloodsports when they're ramming each other for territory or for a mate. Don't confuse with pachyderms headbutting; those would be an example of Rhino Rampage or Cruel Elephant.