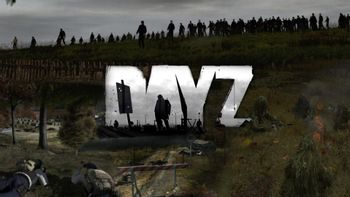 DayZ is a post-apocalyptic survival simulation game set in the fictional 225 square kilometer post-Soviet state Chernarus (carried over from ARMA II), after an outbreak of an unknown infection that has wiped out most of the world's population. Players can stay out of the way and fend for themselves, team up with other survivors, be a bandit and murder everybody they come across, or anywhere in between. Whichever they choose, they will also have to contend with what's left of the indigenous population, turned into shambling infected.

a mod for the video game ARMA II, which converted the realistic military sim into a post-apocalyptic zombie-survival simulation. DayZ proved extremely successful, giving ARMA II a huge boost in popularity and at the time shooting it up to one of the top ten games on Steam. On August 7th 2012, the official DayZ blog announced that DayZ would become a standalone game.

The first downloadable map, Livonia, was released on December 3rd 2019.

Note: For your own sake, do not confuse DayZ with its Mockbuster, The War Z (later renamed Infestation: Survivor Stories).

Tropes applying specifically to the mod: