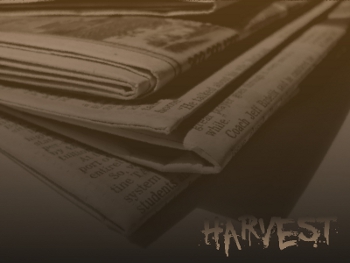 Did we mention you're an Irish journalist with crippling paranoia?
Liam,
Sorry to be emailing you so late. I've just got a call from Detective Flynn about the disappearance case you've been covering. He's a friend, and wanted to tip me off that they think they know where the victims were taken, and they'll be moving in soon - within the next couple of days, even. There's a map attached to this message with directions, get there as soon as you can. I booked you a room across the street, just give the receptionist your name.
Advertisement:
I'm sure I don't need to tell you to be careful, and try not to get in trouble with the garda, I don't feel like bailing you out again.
Good luck,
-Tara
This message is intended only for the named recipient(s). If you are not an intended recipient, please contact the sender or system administrator.
—Description text from the mod.

Harvest is a custom story modification and full conversion for Amnesia: The Dark Descent, the Survival Horror-slash-Adventure Game released in September 2010. It places the player in the shoes of Liam Connelly, a twentysomething reporter for the Irish Record. It is preceded by three prequels, collectively entitled Harvest: Prologue, which put the player in differing characters' shoes in each one-map mini-adventure. Harvest: Prologue, while a completely separate custom story and not a total conversion, is intended only to serve as a backstory for Harvest proper.

The story begins at the custom story selection screen, where the email quoted at the top of the page is visible. It is from Liam's boss, who has received a tip from a friend about a case that Liam has been covering for some time. She makes Liam a reservation at Foulksrath Castle and sends him to report on the police action as it unfolds. Arriving early, Liam decides to tour the castle, and is surprised to see that much of it is restricted from public eyes - a marked change from its days as the country's oldest hostel. He determines to stay in the castle after closing hours, documenting whatever he can find with his camera and notepad.