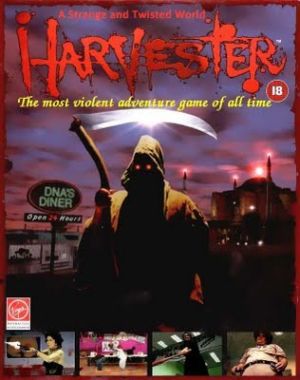 Just a charming '50s town, population 51 (steadily dropping).
"Lovely works, pastoral scenes, noble sculptures... these are easy on the eye and mind. But when confronted with a work of hideous form, you're forced to deal with it, even if only to dismiss it as trash. Sadly, the most extreme works are the hardest to dismiss."
Advertisement:

The only thing Steve knows about himself is that his name is Steve, and he's really just taking that on faith. Otherwise his memory has been gone ever since he woke up. He soon discovers that he is apparently a citizen of the Midwestern farming town called "Harvest", and that the year is 1953. Initially the neighborhood may appear to be a perfect Stepford Suburbia, but with even more things wrong than usual. Mom is baking (thousands of) cookies in preparation for a bake sale that's still a week away. Of course, they won't be good then, so she's shovelling them into the trash. Steve's baby sister lies screaming in her crib, neglected. Steve's brother, Hank, is immovable from in front of the television, where he watches a disturbingly gory and realistic show about cowboys killing Native Americans. There's not much of a plot or anything, just killing them over and over, with the "special effects" making it disturbingly real.

Mom informs Steve that when the big day comes, the town's Lodge will have a big blood drive, and everyone has to give blood. Well, except for Lodge members. Steve should consider joining the Lodge. Steve decides to join the Lodge, if he makes it past the paper boy that is. See, times have been tough around Harvest since the newspaper building burned down, and a guy's gotta do what a guy's gotta do, right? Well, if there aren't any newspapers being made, then our lad has decided to pick them up. He'd really appreciate it if you could help him out, just leave a newspaper for him outside every day... or there might be some consequences.

Upon visiting the Lodge, the Lodge's Sergeant at Arms informs Steve telepathically that the Lodge has standards Steve must meet in order to apply, and for today's task Steve must steal or otherwise acquire an application to the Lodge. Each day, Steve is given a successively worse task, and finds himself becoming more and more the villain in his own tale, but he can't stop... he has to join the Lodge before the blood drive. Everyone has to help with the blood drive, Steve.

Harvester is a reaction to, and deconstruction of, the idea that video games promote violence, taking it to its furthest extreme in the idea that video games create serial killers. Unsurprisingly, it was considered one of the most disgusting games ever created. Because of the game's graphic nature, it was banned in Germany, heavily censored in the UK, and never released in Australia at all, as the distributor felt there would be no point as the game would just get banned anyway. In the US, the game received heavy attention from Moral Guardians and Media Watchdog types. Harvester set out to offend the hell out of anyone who took it seriously, while simultaneously using a quirky sense of humor for anyone else. The game's goal is both to make you laugh at certain points and be horrified at others, it's a rare person that Harvester cannot make squirm at some point.

In 2014, the game's producer, Lee Jacobson, in collaboration with Nightdive Studios, released Harvester for PC and Linux on GOG.com on March 6, and on Steam on April 4.