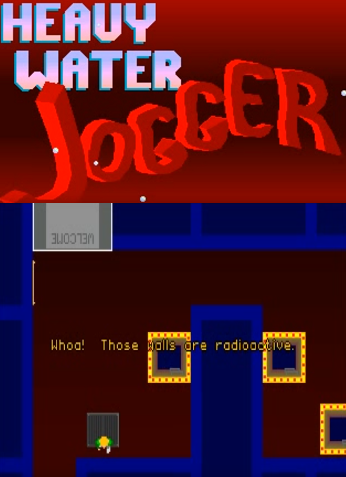 Heavy Water Jogger is a top-down, third-person perspective action game that was released by Viable Software Alternatives for DOS PCs in 1992. It is now abandonware, and can be freely downloaded or played in a browser here

One day, Fred Fluke, owner of Three-Miles-Inland nuclear plant arrives at work to find that one of the plant's senior technicians, fed up with being paid minimum wage, has finally snapped and set the nuclear reactor to self-destruct. Fluke has only 30 minutes to make it to the control room and avert a disaster.

In Heavy Water Jogger, you, of course, play Fred Fluke himself, the man tasked with saving the town. Beginning at the entrance to the nuclear plant, you must make your way through the maze-like building to the control room at the center.

Your task would be hard enough if you only had to navigate the maze, but on top of that, the plant's V7734 model security robots have gone haywire, and if they catch you, they'll zap you back to the beginning of the maze.

Heavy Water Jogger is a game where you can't lose. Even if you run out of health or time, the game will simply pretend the whole thing never happened, and start over from the beginning. (For this reason, the game also doesn't allow you to save your game at any point.) The game is designed to be intentionally frustrating, often sending you back to start from scratch but never actually ending until you win.