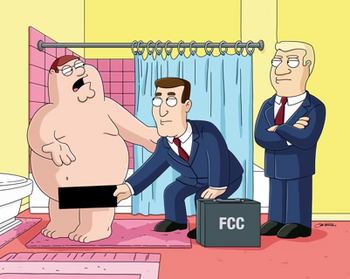 ♫ They're as stuffy as the stuffiest of special interest groups
Make a joke about your bowels and they order in the troops! ♫
"Fuck you very much, the FCC
Fuck you very much for fining me
Five thousand bucks a 'fuck',
So I'm really out of luck
That's more than Heidi Fleiss was charging me"
— Eric Idle, "The FCC Song"
Advertisement:

There are rules of taste and decency on TV. There are also legal requirements to be followed.

In order to enforce these, governments set up media watchdogs. People (more often than not Moral Guardians) complain about a program, the body looks at it and rules whether their complaints are justified.

In the UK, the media regulator is Ofcom. The current UK record for the most complaints (over 39,000) about a TV program is held by Celebrity Big Brother, particularly the bullying and racial abuse directed at eventual winner Shilpa Shetty during the fifth season of the show.

The US version is the Federal Communications Commission, while the latest name for the UK television one is Ofcom (in addition there is the ASA for adverts and the voluntary PCC for print media). Many stations (in the US, at least) also have their own self-regulating "Standards and Practices" department (commonly known as "the network censors"). Even though the FCC only has regulatory authority over broadcast networks and not cable channels (except for content considered obscene or forbidden by other laws, and requiring equal opportunities for political candidates

), most cable channels self-censor to please advertisers (though they become more lenient late at night). In Japan, the relevant body is the Eiga Rinri Kanri Iinkai, or Motion Picture Code of Ethics Committee (colloquially abbreviated as "Eirin;" don't ask it for help).

These Media Watchdogs are frequently subjected to Values Dissonance. In the Anglospherenote US/Canada, UK/Ireland, and Australia/New Zealand, sex and nudity, no matter how mild, will be censored and criticized to hell, even though huge and over-the-top violence is left alone (unless it's on a show targeted to children). In the rest of Europe, the opposite Values Dissonance happens: sex and nudity can be found easily, but any violence is censored to hell.

Likewise, there's dissonance even in the Anglosphere - the UK and Canada are fairly relaxed when it comes to bad language, ie occasional swearing is increasingly overlooked on pre-teen shows, but the US can be very strict in how a single cuss affects the rating of an entire series.

Getting Crap Past the Radar is the art of outsmarting the Media Watchdogs. See also: Executive Meddling.

The Censor Monkeys parody this.

The Censor Monkeys parody this.