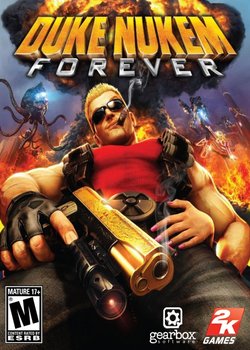 Time to cash in your bets.
Holsom Twin: What about the game, Duke? Was it any good?
Duke: Yeah, but after 12 fucking years, it should be.
— This trailer

This is taking forever! Time to stop pissing around and describe this bad boy!

Duke Nukem Forever is, for all intents and purposes, two things.

Against all odds, it finally became available on June 14th, 2011 for Xbox 360, PlayStation 3, and PC on DVD or via Steam, just in time for Duke's 20th anniversary. The Hail to the Icons Parody Pack

was released on October 11th as the game's first DLC pack. It includes four new maps, each making fun of an iconic FPS series with a parody-weapon based on said series, and three new game modes. A second DLC pack titled "The Doctor Who Cloned Me", released in December 2011, has a smaller campaign taking place right after DNF's ending which gives proper closure to the story along with four new multiplayer maps.