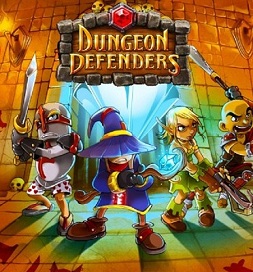 Dungeon Defenders is a video game developed by Trendy Entertainment that combines the tactics and long-term gameplay of Tower Defence with the chaos of an Action RPG. You are one of four great heroes, who long ago sealed away a great evil in magic gemstones, and must now- wait, sorry. No, they're gone off to do something else. You're one of their pint-sized apprentices. Now the remnants of the evil army are marching on your fortress, and you must prevent them from releasing that great evil. How? Well, there's a few ways...

Because of the variety and specialization of the classes, Dungeon Defenders is clearly designed for multiplayer, and all of the cutscenes feature all four characters working together. Gender-swapped versions of the base four classes were also released; they are completely new models with their own special abilities.

Characters collect Mana from their battles, which is used as a form of universal currency- Mana is spent to create towers during defence, to level up weapons, to purchase new weapons and to buy pets and other bonuses.

The game was released on the October 19, 2011, through Steam, and is available for PC, Xbox 360 and PlayStation 3, with support for cross-platform play. Two free-to-play versions (Dubbed First Wave and Second Wave) have been released for iOS and Android devices, which support microtransactions to quickly obtain extra mana. For those on the PC, Trendy Entertainment has released a source development kit for modders to play with, though mods can only be used on open servers. In addition, Trendy provides special events and items as well as regular updates and patches.

There is also a four part psuedo-expansion titled Quest for the Lost Eternia Shards. Taking place after the main plot, with the Eternia Crystals secure, our heroes venture out into the world to track down the missing shards of a shattered Crystal. This new campaign consists of four maps that each introduced a new type of enemy. Each one also has a boss at the end of the final wave. As with most bosses, it's generally advised to have good 'action' heroes, with gear with high defenses, health and good personal damage around to deal with them. The first part of the campaign was released on December 14, 2011. At this time, the Eternia Crystals have all been released for PC. A portal towards the final boss is unlocked upon winning all four eternia shards (for that difficulty and lower). The maximum player level has been increased bit by bit with several updates and is now, as of December 2012, level 100. Updates for consoles seem to be behind quite a bit for various reasons.

A sequel, Dungeon Defenders II was released on Steam in 2014 as a free-to-play Multiplayer game.