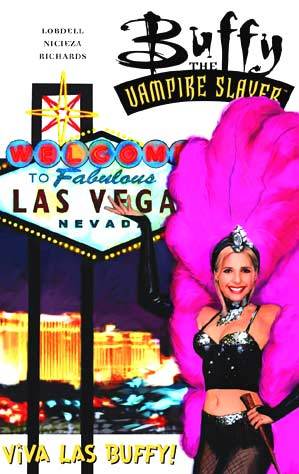 "Wait! We can't stop here. This is bat country."
"We are treated to the customary CHARACTER WHO HAS NEVER BEEN TO VEGAS LOOKING OUT THE WINDOW OF A MOVING CAR AT ALL OF THE EXTRAVAGANTLY DECORATED CASINOS montage."
— The Editing Room, The Abridged Script

For the actual city in Nevada, see Las Vegas.

The principal characters journey to Las Vegas. At least one has a gambling problem and will end up dead broke or winning a ton of money (bonus points if an urgent need for cash is why they go to Vegas). Most likely, one or all end up in jail and/or married. It's possible that someone might host their friend's Stag Party here. Don't be surprised if there's a Drunken Montage or Binge Montage. Don't be surprised either to see Wayne Newton (or an thinly-veiled Expy of him), the former teen pop star of the 1950s who popularized the notion of musicians relocating to Vegas in order to find steady work within the city's many high-profile night spots, and continued to perform off-and-on in the city well into the new millennium. If children are involved, expect some harsh Mood Whiplash when they confront adult themes for the first time, and hilarity may or may not ensue, although this story element has become obscure past the year 2000. In reality, Las Vegas has actually become much more open to people who do not gamble and / or who have kids, and they even have a support group people can call if they have a gambling problem!

This should be considered a separate genre from shows which are routinely set in Vegas, e.g. CSI. In other words, if the show is SET in Las Vegas, it does not belong here. If the cast decide to go visit Vegas and hit up casinos and the line "What happens in Vegas stays in Vegas" is mentioned, it belongs here.

Viva Las Vegas consists entirely of casino interiors (with rattling-change sound effects, although modern slots dispense credit slips), the Strip, and possibly Fremont Street. And, of course, every other person you'll meet is an Elvis impersonator who doubles as a clergyman or justice of the peace for quickie, no-questions-asked marriages. These many not be too far away from reality...

Television Geography is common when using Vegas, as are Brand X casinos, unless it's total Product Placement for a real casino or a company's family of casinos (most of the Strip is presently owned by two companies, although several other companies have stakes in either Strip or near-Strip properties). The "Welcome to Fabulous Las Vegas" sign is the city's prime candidate for the Eiffel Tower Effect, given that its image is in the public domain while the likeness of the hotels themselves are privately held. Still, some movies will inflict Monumental Damage on the resorts themselves.

, not the Strip, not the gigantic casino resorts, and not even the "Welcome to Fabulous Las Vegas" sign. They are actually located in the unincorporated towns of Paradise and Winchester; this was done intentionally to dodge paying municipal taxes. On the other hand, the Stratosphere

tower, which is the tallest building west of the Mississippi River and which can be seen from practically anywhere in the city (and which shows up on innumerable souvenirs of LV), and the Downtown district,

which contains the Fremont Street Experience

and most of the casinos seen in older features and series about Vegas, are firmly within Las Vegas city limits. However, there are two things worth considering about these loopholes: First, the city of Las Vegas proper is the seat of Clark County (whose local government would be in charge of collecting taxes on the casinos), and second, Vegas proper, Paradise, Winchester, and other surrounding suburbs and unincorporated communities collectively form the Las Vegas Valley, making the name of this trope technically accurate.

Contrary to popular belief, prostitution is illegal in Las Vegas, Nevada. By state law, any prostitution outside of a brothel is illegal, and a brothel must possess a state-issued license to operate legally. Every county is allowed a "local option" on whether to allow operations of brothels. However, the law immediately prohibits any county having a population over 400,000 from issuing brothel licenses, which excludes Clark (encompassing Vegas) and Washoe (encompassing Reno) counties. The end result of this is that in Nevada's largest cities, prostitution is illegal by default. From Vegas, one has to drive sixty miles west to Pahrump to find the nearest legal brothel. Of course, this doesn't prevent illegal prostitution from being rampant (much as it is in most other large cities).

A destination of a Vacation Episode, Road Trip Plot, and Vacation, Dear Boy.

Las Paradiso is the game's take on Paradiso; a city in the middle of the desert full of neon, casino resorts and organized crime.

Las Paradiso is the game's take on Paradiso; a city in the middle of the desert full of neon, casino resorts and organized crime.