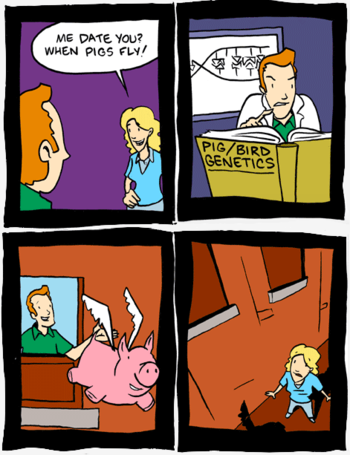 This is what happens when Finagle's Law, Tempting Fate and the human tendency to spout hyperbole when a simple "never" would suffice all get together and have a drunken party with hilarious results.

When circumstances conspire to incite someone to exclaim that something would happen if and only if something everyone knows is impossible occurs — "when Hell freezes over" (nevermind that according to The Divine Comedy, the final level of Hell is frozen over) and/or "when pigs fly!" and/or "when pigs fly over the frozen landscape of Hell!" — you can bet that by the end of the episode we will see pigs soaring majestically over the landscape or Satan running ski slopes while sipping hot cocoa.

Thank you for riding Pork Airlines, the only way for pigs to fly.