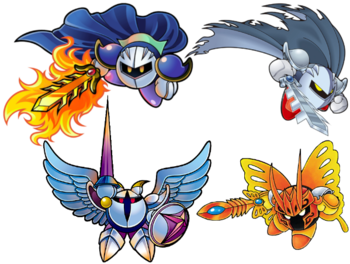 A selection of sinister similar spherical swordsmen.note L - R, top to bottom: Meta Knight, Dark Meta Knight, Galacta Knight, and Morpho Knight.
A character who's written into the story to take the place of an antagonist who is no longer in conflict with the protagonists, due to defeat, Heel–Face Turn, or otherwise. These characters differ from villains whose specific purpose is to show up previous antagonists by having aesthetic similarities to the villain they replace. And while not a requirement, they will most likely lack their sympathetic personality traits, if they had any.
Advertisement:

The reason this is done is to keep fans who are disappointed by the former villain's defeat satisfied. Overcoming an antagonist comes at the cost of no longer being able to pin them against the heroes. If the villain's design was particularly cool, some viewers will be upset that the awesomely-designed antagonist doesn't fight the heroes anymore. The design preservation villain primarily exists to preserve the aesthetics of a previous memorable antagonist to keep these viewers satisfied.

Due to their purpose being mainly to uphold the previous villain's physical attributes, the design preservation villain will usually look very similar to the villain they replace, if not Identical. If the villain they replace performed a Heel–Face Turn, this character may be an Evil Counterpart, if not a straight up Evil Doppelgänger. Their position as a replacement may even be acknowledged in-universe if they are an Evil Knockoff. Some villains will even have a multitude of different antagonists down the line's designs pay homage to theirs.

These characters will often have less redeeming personalities which guarantees longevity as they are less likely to fall into the same trap that lead to the former villain's Heel–Face Turn, if that is the reason behind the lack of confrontation with the heroes.

In a video game, the similarities may be more involved with gameplay rather than cosmetics. You would probably experience similar game mechanics to their predecessor when they are confronted. They are more likely to have wider personalities than similar characters in other forms of media because of this.

Most likely, this character is going to be aligned with evil until they are defeated, or the story ends since they mainly exist to be a cool opponent for the heroes to fight. If they have a role outside of this, it will usually be in the form of a rivalry with the former antagonist, if they're still around.

Compare Replacement Flat Character, where a new character is created to take the place of a former Flat Character for the sake of character contrast. Contrast Contrasting Sequel Antagonist.