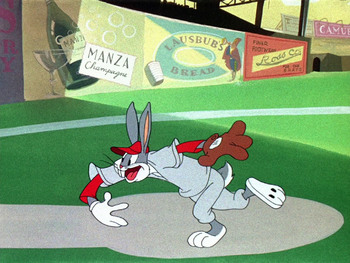 Bugs is a baseball fan taking in a game at the Polo Grounds between the Gas-House Gorillas, a team of burly roughnecks, and the Tea Totallers, a squad of fragile old men. The Tea Totallers are losing the game 95-0 when Bugs begins heckling the Gorillas, calling them "dirty players" and claiming he could "lick them in a ballgame with one hand tied behind my back... all by myself!" This leads to the Gorillas forcing Bugs to suit up and make good on his boast. Bugs, playing against the Gorillas alone, uses his typical schemes to win the game.

The trope namer wasn't the first time Bugs pulled a fast one.

The trope namer wasn't the first time Bugs pulled a fast one.