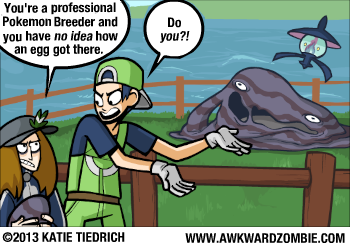 Love conquers all, including plausibility.
"If he's a planet, how could he make a baby with your mother? He would smush her."
— Drax, Guardians of the Galaxy Vol. 2
Advertisement:

The usual intermediary step between an Interspecies Romance and a Mix-and-Match Critter.

In Video Games where you Gotta Catch Them All, and where "them" are Mons, often the only way to acquire every last critter in the game is to, well, breed them. This may involve somewhat conventional animal husbandry, or stranger things, but the important thing is that there are not always reasonable limits on what can be bred to what. The unintentional (or intentional) ability to produce this phenomenon is attributed to Gameplay and Story Segregation.

In a broader sense, this may apply to any work of fiction in which two grossly dissimilar species are somehow capable of interbreeding. This pretty much misses the point of the term "species", which is supposed to indicate which animals can breed successfully in the first place.Note Which is a rather shaky definition further confounded by domestic dogs due to their rather wonky genetics. While a Great Dane and a chihuahua have fully compatible gametes (i.e. if you introduce Great Dane sperm to a Chihuahua egg, the result would be a fertile mutt of some description), if implanted, they cannot (to a first approximation) physically mate due to the size difference, despite being considered the same species. Meanwhile domesticated dogs are known to produce fertile hybrids with coyotes, which are considered a separate species.

If the result of this unholy union isn't a Half-Human Hybrid or some variety of Mix-and-Match Critter, then Gender Equals Breed may very well apply, with the offspring being strictly one of its parent species. It’s also possible that the child is a completely different species from either of their parents.

In case you did not understand all that: To make a long story short, it's basically a giant animal in a romantic relationship with a small animal. So, how can they make babies?

This is somewhat Truth in Television, because as strange as this may seem, there ARE species in the real world which display this same sort of extreme dimorphism, to the point where they have been miscategorized as wholly different species in the past. Anglerfish males, due to being basically just parasitic appendages to females,

are arguably the most famous example. This just might be one of these cases. However, most of the time, Pregnancy Does Not Work That Way in Real Life.

The trope name itself comes from the GameFAQs boards, where the user "Endgame" made a topic containing the name and elaborated (see the Video Games entry on this page for explanation).

Compare Man of Steel, Woman of Kleenex. See Also Interspecies Romance, Boldly Coming, and Hybrid Monster. See G-Rated Sex for when this is seen as Unfortunate Implications and therefore defied with a means of reproduction that avoids mating like normal animals. If they're the same or very similar species, it can be Huge Guy, Tiny Girl or Tiny Guy, Huge Girl.