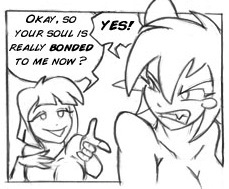 is a webcomic by fantasy artist Fredrik K.T. Andersson which started in 2004. It follows the adventures of a human girl named Ayanah and her demon partner Baalah, beginning with their first encounter and their escape from the crypt in which Baalah was contained.

As of about November 2010, new pages appeared after two years without them. Then a couple of days into January 2012 the strip stopped posting again, only to post on August of 2013. Only to stop posting again this time for over four years and counting. As of late 2018, the webpage itself hasn't been updated, but the artist's deviantart page

nsfwnote Link is to main page, which includes NSFW if you're logged in, but is blocked if you're not. now has all six sections (Minus the single page of 7 that was the last post on the website). The notes for Part 1 includes the line, "So, does this mean I’ll be doing more Pawn? Well, to all of you who kept poking that lazy butt, that stick just got shorter. ;3"

Contains lots of bare nipples, so the webcomic link at the top is to the SFW first page. Links below are mostly NSFW. It's pretty light in content, though—more an R than an NC-17.

Tropes Used in the Webcomic