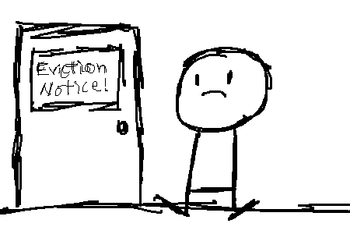 You come home from a long day of being a loser and-
Oh shit what the fuck is that. [1]

PAY DAT RENT!!!1, or PDR, for short, is a web comic written by "Grumpisimo" that began on July 22, 2014. It uses the Homestuck style of writing and presentation, and even has a home on the MSPFA

What doesn't make it a lot like Homestuck is the fact that instead of a curious child playing videogames, we have a constantly stripping average protagonist trying to pay an overdue rent. This spirals out of control as the protagonist is dropped into a chain of events involving such things as stealing bikes from children, selling his soul to a demon, joining a cult, and much, much more confusing stuff. All this confusion is driven by the fact that the actions done in the comic is all suggested by readers of the comic, who in turn also submit characters to appear in the comic.

Beyond this paragraph, all spoilers are unmarked as one, the comic is not that long, and two, the ludicrous amount of plot points start off early on, as one aspect leads to another.

You good with the spoilers?