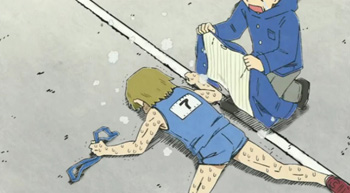 This is what you get for being too lazy to do the Training Montage.
Jemma: Another move like that, and you're likely to break every bone in your arms.
Daisy: Yeah... I might've done that already.
— Agents of S.H.I.E.L.D., "Let Me Stand Next to Your Fire"
Advertisement:

The Heroic Red Ring of Death occurs when a hero has pushed themself too hard and abruptly starts to break down physically. That one of these is coming may or may not be clear in advance, but when it starts, it will hit all at once.

Causes vary. It could simply be the hero wearing themself out after a good case of Heroic Resolve. It could be the consequence of using the Dangerous Forbidden Technique, Deadly Upgrade or removing their Power Limiter. Or caused by Phlebotinum Overload. Some works directly support this via Cast from Hit Points. It might be represented with burning Tron Lines, Tainted Veins, Volcanic Veins or turning red. If it's done on purpose, it may be a Heroic Sacrifice, but it is at least as likely to be accidental.

Injuries sustained during Heroic RRODs should range between serious and fatal if left untreated (although rarely crippling), possibly leading to a case of You Are Already Dead, or Secretly Dying. Also a common cause of You Can Barely Stand.

Named after a warning signal on Microsoft Xbox 360 consoles.note They normally have a green four-part ring when they power on; when one gets the red ring instead, it usually means that the system can no longer physically function. The red ring generally doesn't appear until it's too late to do anything about it, at which point it's usually time for a new console. Originally there were 4 red ring codes in total, three red lights being the classic RROD and indicating the dreaded hardware failure (stemming from a bad soldering job on the motherboard). One red light indicates another kind of hardware failure, and two red lights mean the console is overheating. Four red lights (the only actual *ring*) is known as the Fake-out Red Ring and appears when the console is turned on without plugging the AV cables into the TV. But that just confused people and led to a lot of unnecessary returns, so in later models, the red ring always means something has Gone Horribly Wrong. See also Overheating, the underlying idea behind this.

A Sister Trope to Power-Strain Blackout (when the cause is not as serious), Heroic BSoD (the mental and emotional counterpart).

Compare/Contrast Pent-Up Power Peril (when you have a power that builds up in your body and not using it will cause peril).

Actual video games (regardless of console) may have Anti Poopsocking mechanisms in place to (hopefully) prevent this in the people who play them.

Not to be confused with Rings of Death.

Since this is an ending (and sometimes a Death Trope) spoilers are unmarked. You've been warned.

During a race against the Blackbird and Devil Z, Kei's Supra RZ has started showing signs of structural instability due to the lack of roll cage and chassis reinforcement as its body is getting deformed by the extensive amount of G-force at high speed, causing it to become too unstable to drive.

During a race against the Blackbird and Devil Z, Kei's Supra RZ has started showing signs of structural instability due to the lack of roll cage and chassis reinforcement as its body is getting deformed by the extensive amount of G-force at high speed, causing it to become too unstable to drive.