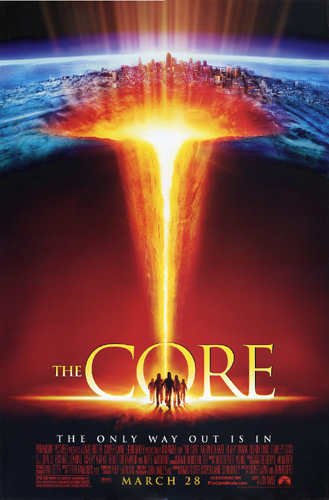 Keyes: The core is the size of Mars. You're talking about jump-starting a planet. This is a superheated hyper-fluid of molten iron and nickel at 9,000 degrees Fahrenheit. And the deepest we've ever been is seven miles, with a two-inch drill bit. [...] We're talking about millions of pounds of pressure per square inch. Even if we somehow came up with a brilliant plan to fix the core, we just can't get there!
Advertisement:
Zimsky: Yes, but... what if we could?

The Core is a 2003 Disaster Movie (or possibly a Stealth Parody of same) directed by Jon Amiel, with a cast including Aaron Eckhart, Hilary Swank, Delroy Lindo, and Stanley Tucci.

The film is about a group of scientists who must travel to the center of the Earth to restart the faltering core of the planet. The government gets a group of four scientists to find a way to make the Earth's core continue to spin, since it's winding down and with it goes the Earth's magnetic field, and without it the entire surface will be melted by cosmic winds. Using literal Unobtanium to build a ship hull that grows stronger the more pressure is put on it, they set off to deploy a set of five 200 megaton nuclear bombs in the core with the idea to restart it spinning.

Not to be confused with the 2000 film Deep Core.