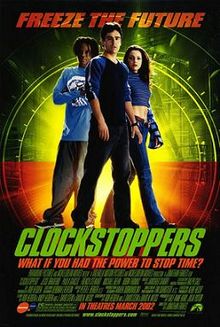 Clockstoppers is a 2002 film directed by Jonathan Frakes.

It follows the story of Ordinary High-School Student Zak Gibbs (Jesse Bradford), who stumbles upon an Applied Phlebotinum watch that allows him to stop time (okay, technically, it gives the wearer Super Speed and alters their perception of time).

Before long, he's tangled up in a conspiracy as Quantum Tech, the company developing the technology, comes after him and will stop at nothing to get it back.