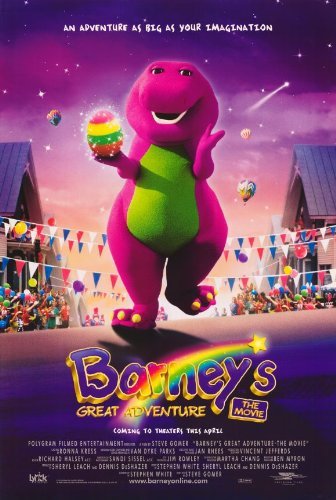 "The dreams you see most clearly are most likely to come true."
—Barney
Advertisement:

Barney's Great Adventure is a 1998 film based on the Barney franchise.

Cody Newton (Trevor Morgan), his sister Abby (Diana Rice), and her best friend Marcella (Kyla Pratt) are dropped off at their grandparents farm. With a little imagination, Barney (Bob West - voice and David Joyner - body) comes to life and their summer vacation will never be the same. One evening, a magical egg falls from outer space and is revealed to house a Dream Maker, a being capable of showing children their dreams. Suddenly, the egg goes missing and the chase is on! Barney and his friends search everywhere from a parade and a fancy restaurant to a circus. Can they return the egg back to the farm in time?