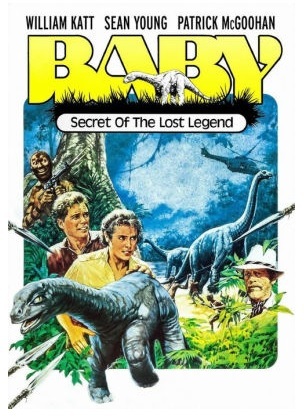 In Africa, paleontology understudy Susan (Sean Young) and her husband George (William Katt) discover that the local legend of the Mokèlé-mbèmbé is in fact a family of living brontosauruses - a father, mother and a hatchling. In doing so, George and Susan accidentally lead Susan's mentor, mercenary scientist Eric (Patrick McGoohan) and his hired team of soldiers, who kill the father brontosaurus and capture the mother, leaving George and Susan the sole caregivers of the infant, whom they nickname "Baby". They fight to protect Baby from the dinosaur hunters and rescue Baby's mother.

A 1985 live-action Disney film released under its Touchstone label, unlike other dinosaur films of the time that relied on Stop Motion for its visual effects, Baby: Secret of the Lost Legend, opted instead for a combination of life-sized animatronics and puppets worn by people to provide the walking motions; the film was Darker and Edgier than most of Disney's fare at the time, but still insisted on moments of cuteness involving Baby. As a result, the film mostly failed to find an audience and is typically dismissed by critics. However, it is fondly remembered by most of the people who saw it as children in the 1980s.

Compare to The Last Dinosaur, another earlier dinosaur film that used similar effects.

Secret of the Lost Tropes: