Film / The Barber of Siberia 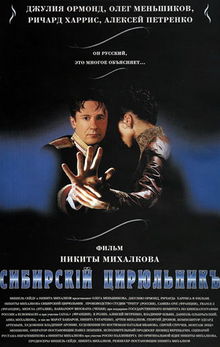 The Barber of Siberia (Сибирский цирюльник, Sibirskiy tsiryulnik) is a 1998 Russian film that re-united the Academy Award winning team of director Nikita Mikhalkov and Michel Seydoux. It was screened out of competition at the 1999 Cannes Film Festival.
Advertisement:

"The Barber of Siberia" is dedicated by Mikhalkov to Russian officers, and its main topic is the set of values regarded as the cornerstone of Russian mentality, culture and politics. Values like honor, truthfulness, and willingness to sacrifice one's life.

The plot is a love-story. Jane Callahan (Julia Ormond), a beautiful American, writes to her son, a cadet at a famous military academy, but who is he? Her memories take us back 20 years to when she arrived in Russia to assist Douglas McCracken (Richard Harris), an obsessive engineer who needs the Grand Duke's patronage to sponsor his invention, a massive machine to harvest the forests. On her travels, she meets two men who will change her life forever: a handsome young Andrey Tolstoy (Oleg Menshikov) with whom she shares a fondness for opera, and the powerful General Radlov (Alexei Petrenko) who is entranced by her beauty and wants to marry her. Tolstoy and Radlov, much to the surprise and indignation of the latter, become rivals for Jane's love. She confides a deep secret to Tolstoy, promises to marry him, and together they spend a passionate night of love. But later he overhears Jane denying her interest in him to the General. Distraught, Tolstoy attacks the General, who arrests his young rival on false charges and banishes him to Siberia, to 7 years of hard labor and 5 years of isolation.

Jane never gives up hope of finding Tolstoy, her true love. After ten years later, although by now married to McCracken, she returns to Russia to discover where he lives in Siberia. She goes to his home, where she finds that Tolstoy is married and has children. She leaves from there taking with her the secret of her true love which will forever tie her and her son to the huge mysterious country.