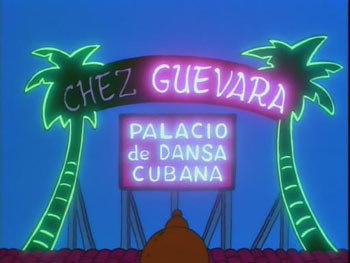 "You can't ban me from your bistro! It's my chez away from chez!"
— Frasier Crane, Frasier
Advertisement:

Want to make your restaurant sound like a high-class establishment serving gourmet French cuisine? Call it "Chez X" (French for "X's Place" or "X's Home" or "At X's"). Related to the word "casa" in various other Romance languages such as Spanish and Italian, it's pronounced something like "shay." Bonus points if X is either a French name or a French-sounding real or nonsense word. This naming scheme is used in real life also, although it's not known whether the fictional trope or the Real Life convention came first.

This trope is often used ironically, or subverted by being used with a decidedly downscale or inappropriate name. The implication of extreme quality (or at least pretension) is coupled with the implication of extreme cost and social constriction: expect dates or spouses to be tormented by concerns with inability to pay the bill or conform to the Dress Code. Amusingly, the French term is, in French usage, quite informal (as is bistro).