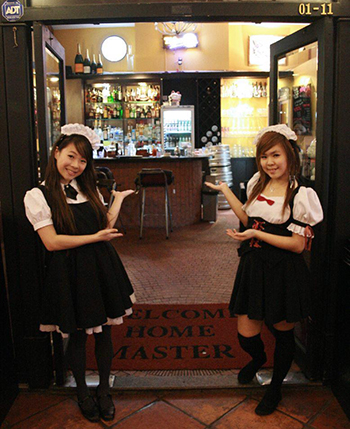 Cosplay Cafés are tea shops or small restaurants where the waitstaff's costumes (and frequently the decor and food) are themed around a scenario or fantasy. They typically offer cold and hot tea and coffee drinks, fancy desserts and light meals, often highly decorated and "cutesy", served with Fan Service With A Smile.

A Maid Café features attractive waitresses who dress and "perform" as obsequious and obedient maids. A Butler Café is similar but with "butlers" and "footmen". Waitstaff at Maid and Butler cafés usually use extra-polite language, including the obligatory greeting "Welcome home, Master / Mistress!"

School Festivals frequently feature cafés as a class activity, and there is a better-than-even chance it'll be modeled after a Maid Café (or possibly a Butler Café if the class is mostly male).

For the more "adult" version, see Hostess Club / Host Club. Frequently uses French Maid Outfit. Compare Fan Service With A Smile. If a couple goes to one together, the menu may include Sweetheart Sipping.