Web Video / history of the entire world, i guess 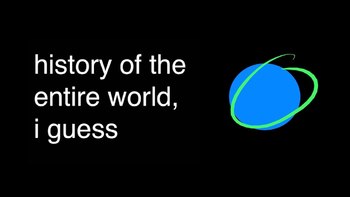 how did this happen?
"hi. you're on a rock floating in space. pretty cool, huh?"
—The intro to the video. It only goes deeper from there.
Advertisement:

history of the entire world, i guess is a video made by bill wurtz, a follow up to his 2016 video history of japan. The video condenses the entire history of Earth, from the universe's formation to the very near future, summing up nearly every major event usually taught in standard Western World History classes (and some which aren't), into a 20 minute crash course with the aid of catchy jingles and humorous visuals.

Not to be confused with History of the World Part I.

the tropes are a deadly lazer:

by the way, where the hell are we?
Feedback

Learn to use an egg.

Learn to use an egg.