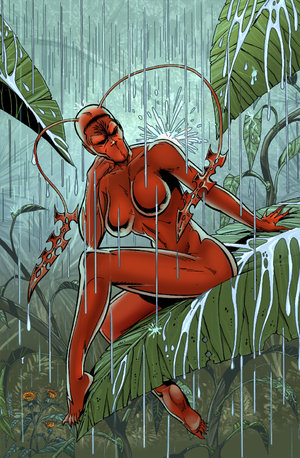 Ant-Woman just had a bit too much redundancy for her.
"I invented Ant in jail in 1996. I was convicted of robbery and sentenced to one year and probation. The event was a turning point in my life. I used to draw portraits and hot chicks on envelopes for commissary. One day around day #6 of 358, I was depressed about where my choices in life put me. I was looking out the barred window and a single ant crawled in from the outside of my window seal. I said to myself 'Man, I wish I were an ant! Then I could crawl right out of this place and start my life all over!' Well, I couldn't pull that one off, so I decided to make a homemade comic book about it. It got around and I had a little audience with my cellmates. Really built up my confidence about drawing. That's when I realized that one day I could be a comic book artist. I sent out my first submission from the county jail. I hope one day my story can be an inspiration to anybody out there who has a dream."
— Mario Gully

Ant is a current superhero comic series written and drawn by Mario Gully.

The focus is on young Hannah Washington, an 8 year old African-American girl that is constantly picked on and ridiculed by many people in her life, and to escape this torment, creates an alter-ego via stories in her diary about a superheroine named Ant, who has all the physical strengths of an actual ant, but none of those pesky hive-mind like weaknesses.

Later, it's discovered that grown Hannah actually is Ant, and all the childhood issues she's been dealing with are actually past memories, non-existent... or something like that. Already somewhat unstable due to being in a mental institution, she chooses to don the Ant mantle, and discover how she came to pass, as well as taking on some super-powered a-hole villains along the way.

The Ant comics contain examples of: