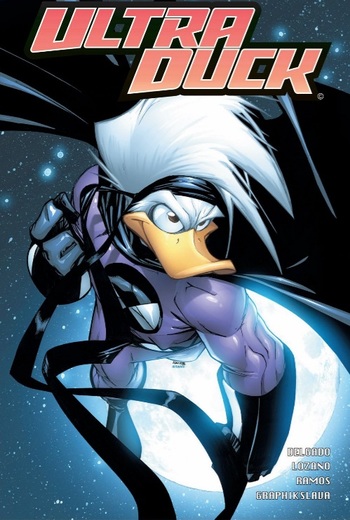 Created in 1994 by then young Mexican author Edgar Delgado, Ultraduck is a superhero comic miniseries about the first Flying Brick in an all-animal setting. The series is about Carlos, a young man whose his life isn't going anywhere, can't get his crush Lisa to notice him, and has to grow up in order to get himself together. His life, however, changes when he gains a gauntlet from outer space that turns him into a super hero, but he also has to face someone with equal power in Horace Rooson.

The series was originally a short 4 issue miniseries drawn and written by Edgar Delgado in the nineties, where the story became a Cult Classic. From that miniseries, came a spin off called "The Valiants", a group of superheroes inspired by Ultraduck.

Edgar Delgado would become an official colorist at Marvel Comics, and in 2011, decided to remake his comic book series, though this time the comic would be drawn by artist Omar Lozano.

The series is a homage to good old fashioned superhero stories like Spider-Man, especially during the time the original series was published. The original comic book series is considered something of an Old Shame for the author due to being inexperienced when he wrote it, with its remake showing how far his talent has grown. Likewise, from the remake also came a remake of "The Valiants", with occasional cameos from Ultraduck himself.

The series is published by Arcana comics, and can also be acquired in Comixology.

Both series of Ultraduck provide examples of: