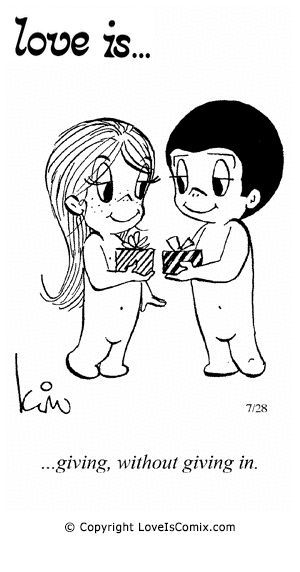 "You know what you two need? A little comic strip called Love Is.... It's about two naked eight-year-olds who are married."
— Homer Simpson
Advertisement:

No, the answer is not Level Of Violence.

is a comic strip created by the late Marilyn Judith "Kim" Grove (later Casali), an artist from New Zealand.

The strip publishes on a daily basis on its Web page following the format of a one-panel strip. It features male and female characters who look no older than 6, always in love and most of the time nude.

The creator's two younger sons are known in their own right within the video game industry, having started out as Doom level creators who did much of Final Doom and have since worked in Valve and other companies. Love is... ripping and tearing.