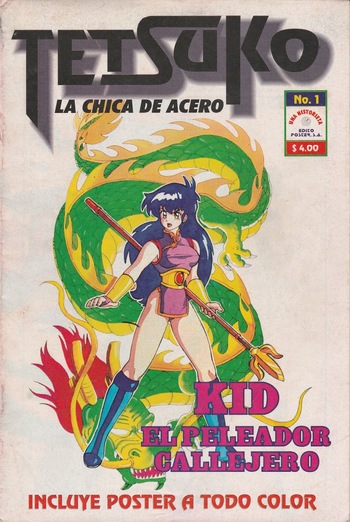 The story revolves around the titular Tetsuko Kiyama, a Japanese girl who is the heiress to a type of martial art that was taught by the women of her family from generations. Unfortunately, her parents had died, so her grandparents took care of her from an early age.

An enormous mystery lies behind the Tetsuko's life, as she is intensely sought after by a clan of warriors called "Psychomantes" who, in the past, were somehow linked to her parents. An important part of the story comes when Goji, an evil spirit in charge of possessing Tetsuko's body, is introduced, but who accidentally ended up locked away forever in a purple dragon-shaped backpack. From this moment on, the girl's experiences become more intense next to him, a very perverted dragon.

The comic was very notorious in his time for trying to emulate the Manga style who was in vogue in Mexico at the time, thanks to the popularity of many anime series like Saint Seiya, Ranma ½ and Dragon Ball, to the grade of using the same black and white format.

Unfortunately, the comic was Cut Short, and Tetsuko became a Transplant in a very famous Mexican magazine about anime and manga named "Conexión Manga", when she was renamed as "Angel Princess" and she became the virtual spokeswoman of the magazine along with Goji. She returns again in another comic named ''Goji! Un dragon con angel".